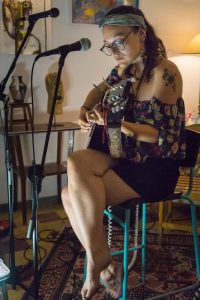 Where are you from and where are you based?
I’m from Liverpool, but I was based in Lisbon for about a year and a half. I dot about a bit, but Lisbon is undoubtedly my favourite place to play, there’s a really open attitude to music here that I haven’t really found anywhere else.

What style of music do you play and what drew you to it?
Depressing acoustic folk? I love fingerpicking and ethereal vocals. Some of the biggest impacts on the way I play are probably Laura Marling, First Aid Kit, and Warpaint. Muse was the first band that made me pick up a guitar though.

What’s your most memorable gig to date and why?
My most memorable gig would actually be the first Garden last year. Not just for the banging energy everyone brought, but also for the fact it was on the hottest day in August! It was 40°c and I remember crawling my guitar up the hill to Graça at around 3pm, to then go on to play in easily the hottest room of my life! Good craic though.

Do you have any other projects outside of your music? What are they?
I’m not sure if you can consider Rubik’s cube as a side project. No, I’m mostly travelling at the minute and just enjoying music. I want to go back to playing on the streets in sunny places and learning to produce on Ableton in my spare time. I’d love to produce one of my own acoustic songs. And make some Nujabes-inspired chillhop on the side.

Apart from the Garden Collective show, what are you going to do while you’re in Lisbon?
Back in Lisbon, I’ll probably end up most days on Rua da Bica 😂

Have you got any other upcoming shows at festivals or other venues that Garden Collective members should check out?
I have no gigs planned so far, but you’ll more than likely catch me on the streets around Lisbon and the Algarve for the rest of summer!

See Jenny Hayes play this Saturday at Garden: the Dog Days of July from 6pm to 6am

Behind the Scenes with Abia Karim

Behind the Scenes with Mick Mengucci

We're Putting on
a Festival!