Remember that Welshman who killed loads of pagans in ancient Ireland and introduced a new religion? Ya, well apparently his name was Patrick, he was a saint, and he told us all that they were snakes.

We didn’t want to celebrate past deaths, religious rituals or the killing of snakes. No! We wanted to celebrate some of the cultural happenings that are going on in Ireland and Portugal right now. Both countries are booming with waves of creativity, so we combined the two Atlantic seafaring nations for a night celebrating past, present and future artistic endeavors.

This oh-so-special event was kicked off with a big wack of poetry. Five poets, to be precise. Four of whom came from Ireland (it was the Paddy’s Weekend Special for a reason).  The poets were Alexander Edgar, Benjamin Burns, Mariana Lobo (who runs some great poetry nights in Lisbon herself), Ciarán MacArtain and Shaunna Lee Lynch.

This mix of poets seem to balance each other perfectly, and if you ever get the chance to see any of them (or preferably all of them) then do it!

Also, in true Garden style, we had another poet ask to perform on the spot, and so “Friend of Impuzzle” read a great piece. What was his real name? Nobody knows.

As the poetry drew to a close, and people shuffled over to the great spread of Garden Grub, we introduced a little music to the night with Tiago, lead singer of Time for T, performing an incredible solo act. We say solo act, but he was joined by a banjo about halfway through as the crowd gathered around.

After the singer-songwriter vibes of Tiago, we switched gear and started what would be a full night of electronic music, starting with Arroz residents De Vibe — made up of Joseph Moon and DJ Loopdog. Next, we got the outrageous tunes of Impuzzle, who took us straight through the last ferry and into the DJ set, headed by Rhinestone Cowboy with Garden regulars Senhor Santos and Steven Rice. 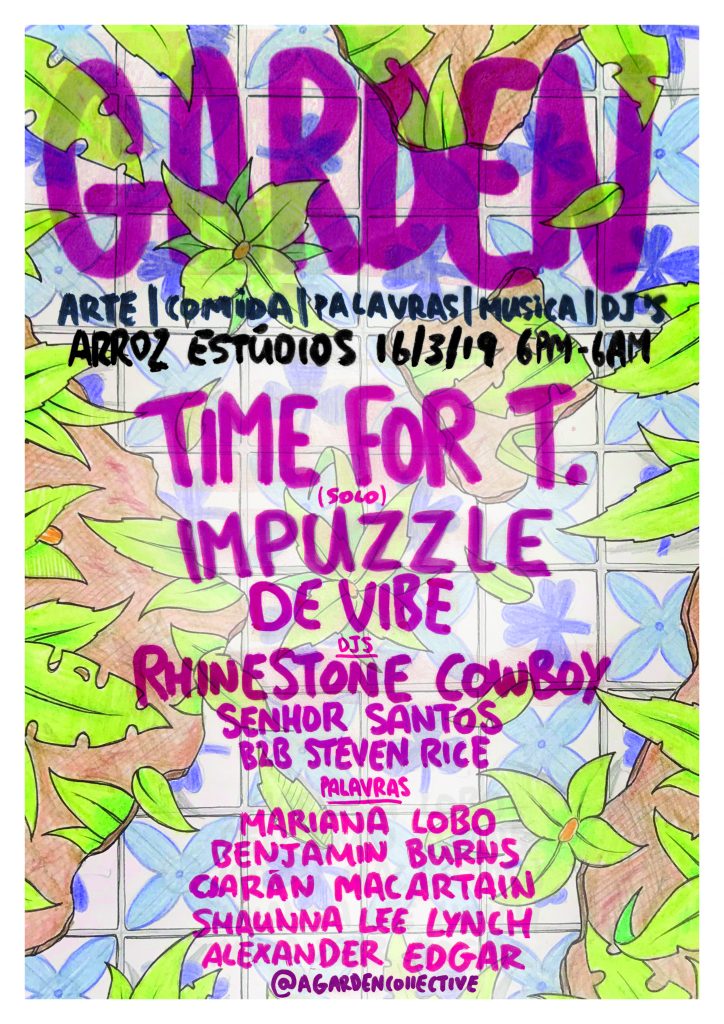 Behind the Scenes with Foggy

Behind the Scenes with Synik

Get alerts about our live events as well as (irregular) updates with zines, art, music, and more.